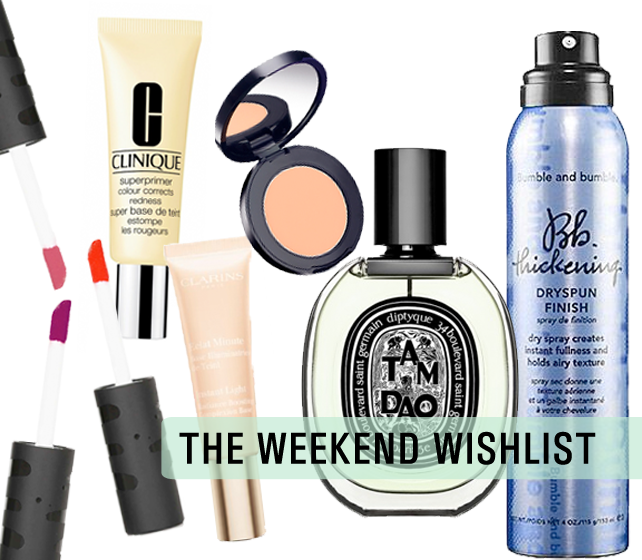 It’s been a while since I’ve made one of these – that’s because I’ve been quite content with the stuff I’ve got, and I’ve splurged quite a bit in December and January and bought so much clothes, shoes, skincare, books, evuhriething. As I’ve commenced working on my thesis as of last week, and I should be busy quite soon, I’ll try to not buy anything this month and to only live through making [wish] lists. I know that online shopping has almost become my favourite kind of shopping, but I’ve got a good feeling that I’ll manage to refrain myself. I think….

Not much different from my usual wish lists, this one includes make up, fragrance and something for dem locks. To start off, I’ve been so intrigued by Topshop‘s newest addition to their already amazing make up line, which are their Gloss Inks. Not particularly fond of the name, but the product looks pretty darn amazing and a much cheaper alternative for the YSL Glossy Stain, which happen to be one of my all-time favourite lip products. The colours Sugar Rush, Relentless, Sloe Gin are the ones I’m eyeing at and not only because of their hilarious names. Fleur has swatched all offerings on her blog, just in case you’re interested.

On to base, I’ve been eyeing these for the past few weeks now, as Kate has not stopped raving about this combo ever since she’s gotten them and after seeing her “Everyday Make Up Video” and her numerous blog posts I had to put the Clarins Instant Light Complexion Perfector in Champagne and Superprimer Colour Corrects Redness on my list. Apart from the ridiculously long product names, the claims they made are impressive and from what I’ve seen, they do exactly that. The Estee Lauder Double Wear Stay-In-Place Concealer has been on my radar for months now. I know it’s been launched forever, but it still is not on the shelves in the Netherlands, making me very frustrated. With the pigmentation and spots I’ve got, I need a good concealer that doesn’t slip away throughout the day and this seems to be the one. Still waiting till it arrives…

I’m not one to splurge on fragrances, as you’re literally spritzing away money, so I usually ask them for my birthday or during Christmas. I’ve had my eye on Diptyque Tam Dao for a while now and when I was in Amsterdam I popped into Skins (similar to Space NK) and got myself some Aesop goodies, I had to pass by their Diptyque counter. A few spritzes later, Tam Dao secured a tight spot on my wish list. Mum, if you’re reading this, I’d like this for my birthday!

Last but not least is Bumble’s variant of the Oribe Dryspun Thickening Spray, which I’ve written about in the past. I love it, though sometimes it can be a bit too heavy for my hair. It’s gotten rather thin because of my hair loss and I’ve read many times that the Bumble Dryspun Finish is basically the Oribe spray for thin hair – my prayers have been heard. I don’t pray…. and also I can’t order it online because of the laws, and it’s not sold anywhere in the Netherlands… again. Oh London, how I miss you everyday, more and more.